Daddy Long Legs - (Pholcidae - Smeringopus)
The Pholcidae, or daddy long legs spiders, is a large family with a worldwide distribution. They are harmless to people as their jaws are unable to penetrate human skin and the venom dose is also too minute. Spider specialists are often asked if it is true that, of all the spiders, the pholcids have the deadliest venom and the only reason there are no human fatalities is because of the small size of the jaws. There is no documentation on this. The venom is possibly neurotoxic, although a few reported bites indicate that it may be mildly cytotoxic, and is deadly to the prey. The myth is possibly a misidentification with Loxosceles (the violin spider the culprit). The pholcids, as well as other spiders, should be encouraged in the home as they control various insect pests such as mosquitoes, flies, fishmoths, ants and moths. 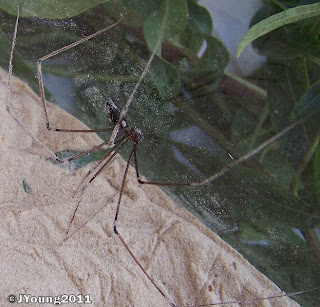 The Familial and generic name is derived from the Greek "pholkos" meaning "squint-eyed.

Other taxa commonly referred to as daddy long legs include: Opiliones (harvestmen - also arachnids), Tipulidae (craneflies) and Gerridae (pond skaters - hemipteran bugs that run on the water). The genus Loxosceles, as stated above, is often wrongly identified as a daddy long legs. 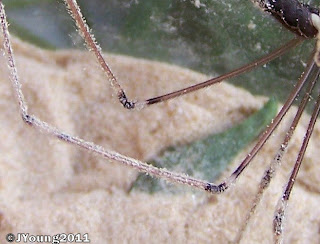 Pholcids hang inverted in what appears to be a messy, irregular, tangled web. These space-webs are constructed in dark recesses, in caves, under rocks and loose bark, abandoned mammal burrows. Pholcus and Smeringopus are synanthropic, occurring in undisturbed areas in buildings and cellars, hence the other common name, cellar spiders. The web has no adhesive properties but the irregular structure traps insects, making escape difficult. The spider quickly envelops its prey with silk and then inflicts the fatal bite. The prey may be eaten immediately or stored for later. When the spider is threatened by a touch to the web or when too large a prey hits the web, the spider becomes invisible by vibrating rapidly and becoming blurred. This blurring may protect the spider from spider hunting wasps (Pompilidae). When off their webs, pholcids walk with an unsteady, bobbing action. 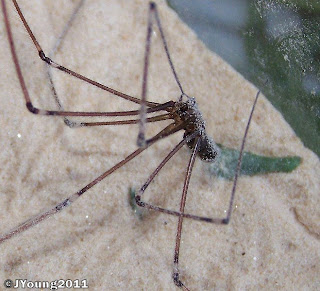 Certain species of these seemingly benign spiders are araneophagous and invade webs of other spiders and eat the host, the eggs or the prey. In some cases the spider vibrates the web of other spiders, mimicking the prey to lure the host of the web closer.

Pholcids are fragile spiders, the body being 2 to 10 mm in length and the legs are up to 30 mm long. Pholcus and Smeringopus have cylindrical abdomens and the eyes are arranged in 2 lateral groups of 3 and 2 smaller median contiguous (together) eyes. Artema and Spermaphora has a small globose (round) abdomen and its eyes are arranged in 2 groups of 3 and no median eyes. Pholcids are grey to brown with banding or chevron markings. 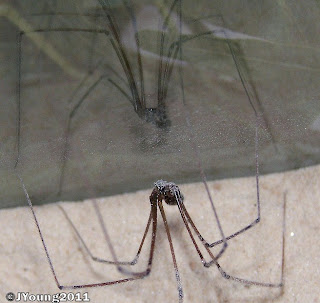 Pholcids are often confused with the violin spider (Loxosceles, family Sicariidae) but the latter does not occur in a web, is much more robust and is very agile on all surfaces. The false violin spider or leaf-litter spider (family Drymusidae) does occur in a web similar to that of the pholcids and in fact closely resembles them but are not often encountered. 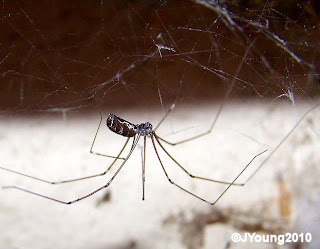 The eggs of the pholcids have no protective sac but are held together as an agglutinated (glued together) mass (similar to balloons held together with a few strands of silk) and, as with the Scytodidae, are carried by the female in the chelicerae and are attached to the web while she feeds. The eggs hatch after 2 to 3 weeks and the spiderlings are either carried by the female for a few days or hang from silk strands in the her web. They mature after 5 moults. 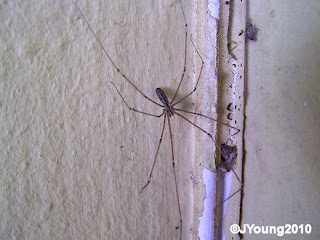