Where do vegetables originate from?

A very good friend of mine got me wondering about the origin of fruit and vegetables and when I started browsing for information, I came a cross some very interesting information which I thought I would share with you. Let’s face it, most of us think that veggies come from the supermarket but they had to start somewhere!! :)

I have always been under the impression that all of them were wild plants many years ago which were later cultivated but my question was, if that is the case, why do we not still find them in the wild? Yes, I know some things are still found there but have you ever seen carrots, lettuce, tomatoes etc growing anywhere besides in a garden? No, I haven’t either.

During my research, I first came across a site called “The origin of vegetables” and this is the information they had there:

Next I Googled for carrots and came up with an interesting site called “The World carrot Museum” (I did not know carrots could be in a museum!!). :)

The following pictures and information is from their site in an abridged version. Please click on the link if you are interested in learning more.

The Carrot is the second most popular vegetable in the world after the potato.

Orange colored carrots are the most popular but are also commonly available in White, Yellow, Red and Maroon. The Maroon colored varieties are making a big comeback in English stores. The black one is a rare Spanish variety.

The carrot is a member of the parsley family which includes about 2,500 species such as dill, caraway, cumin, chervil, coriander, fennel, anise, parsley, parsnip, and celery. It also includes poisonous species such a poison hemlock, water hemlock and fools parsley.

Carrots were originally purple or red, with a thin root. The orange color did not become popular until the 1500's when Dutch growers developed the vegetable by selective breeding to make it less bitter than the yellow varieties. The first carrots were grown for medicinal purposes, perhaps the medicine tasted good!

Research at the University of Wisconsin-Madison suggests that pigments in these colorful carrots, which taste just like regular carrots, may help prevent heart disease and cancer, and reduce cholesterol. Studies examining the health benefits of fruits and vegetables are revealing the disease-preventive powers of the pigments that give plants their distinctive colors. Orange carrots get their color from beta carotene, a pigment the body converts to vitamin A. Vitamin A deficiency, although rare in the United States, poses a major public health problem in developing countries second only to protein malnutrition. 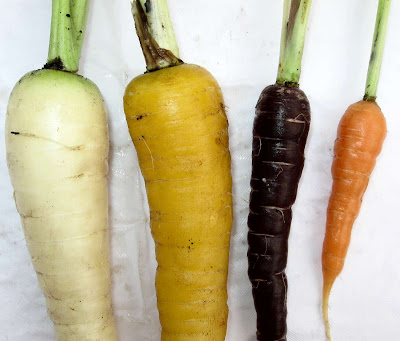 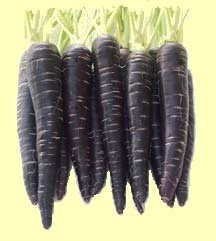 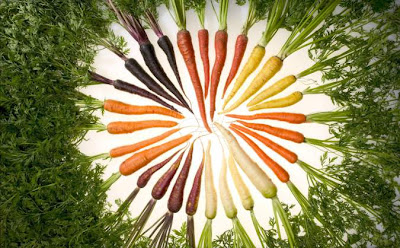 Then I got curious about tomatoes: for more information go to Wikipedia - Tomato
The tomato (Solanum lycopersicum) is a herbaceous, usually sprawling plant in the nightshade family that is typically cultivated for its edible fruit. (As far as I know Nightshade is a poisonous plant).

The tomato is native to South America. Genetic evidence shows that the progenitors of tomatoes were herbaceous green plants with small green fruit with a center of diversity in the highlands of Peru. The first domesticated tomato may have been a little yellow fruit, similar in size to Cherry tomatoes, grown by the Aztecs of Central Mexico. Aztec writings mention tomatoes were prepared with peppers, corn and salt.
Many historians believe that the Spanish explorer Cortez may have been the first to transfer the small yellow tomato to Europe after he captured the Aztec city of Tenochtítlan, now Mexico City in 1521. Others believe Christopher Columbus, an Italian working for the Spanish monarchy, was the first European to take back the tomato, as early as 1493. The earliest discussion of the tomato in European literature appeared in a herbal written in 1544 by Pietro Andrea Mattioli, an Italian physician and botanist, who named it pomo d’oro, golden apple.
Aztecs and other peoples in the region used the fruit in their cooking; it was being cultivated in southern Mexico and probably other areas by 500BC. It is thought that the Pueblo people believed that those who witnessed the ingestion of tomato seeds were blessed with powers of divination.

Now everyone know coffee comes from Brazil – or does it? For more information go to Wikipedia - Coffee
It is thought that the energizing effect of the coffee bean plant was first recognized in Yemen in Arabia and the north east of Ethiopia and the cultivation of coffee first expanded in the Arab world. The earliest credible evidence of coffee drinking appears in the middle of the fifteenth century, in the Sufi monasteries of the Yemen in southern Arabia. From the Muslim world, coffee spread to Italy, then to the rest of Europe, to Indonesia, and to the Americas. Coffee has played an important role in many societies throughout history. In Africa and Yemen, it was used in religious ceremonies. As a result, the Ethiopian Church banned its secular consumption until the reign of Emperor Menelik II of Ethiopia. It was banned in Ottoman Turkey during the 17th century for political reasons, and was associated with rebellious political activities in Europe.
Coffee is a brewed drink prepared from roasted seeds, commonly called coffee beans, of the coffee plant. They are seeds of coffee cherries that grow on trees in over 70 countries. Green (unroasted) coffee is one of the most traded agricultural commodities in the world. Due to its caffeine content, coffee can have a stimulating effect in humans. Today, coffee is one of the most popular beverages worldwide.
And lastly, Sugar cane.
Sugar cane originated in New Guinea where it has been known since about 6000 BC. From about 1000 BC its cultivation gradually spread along human migration routes to Southeast Asia and India and east into the Pacific. It is thought to have hybridized with wild sugar canes of India and China, to produce the 'thin' canes. It spread westwards to the Mediterranean between 600-1400 AD.Arabs were responsible for much of its spread as they took it to Egypt around 640 AD, during their conquests. They carried it with them as they advanced around the Mediterranean. Sugar cane spread by this means to Syria, Cyprus, and Crete, eventually reaching Spain around 715 AD.
Around 1420 the Portuguese introduced sugar cane into Madeira, from where it soon reached the Canary Islands, the Azores, and West Africa. Columbus transported sugar cane from the Canary Islands to what is now the Dominican Republic in 1493.
Sugar production:
Sugar cane was originally grown for the sole purpose of chewing in southeastern Asia and the Pacific. The rind was removed and the internal tissues sucked or chewed. Production of sugar by boiling the cane juice was first discovered in India, most likely during the first millennium BC. Cane sugar is now grown in more than 70 countries mainly in the tropical zone, but also in some sub tropical areas.
Posted by SAPhotographs (Joan) at 12:02 AM

Joan.
An inquiry ,
what is the name of the plant the lufer comes from. you can view it on this http://egyptplants.blogspot.com/
nice one on the vegetables very informative.
Once I moved to my new flat i will be taking some photos of the sugar cane harvesting they are cropping from December to May.

Hello Tony. The only Lufer I know is "Magnolia salicifolia Lufer" but that is a tree or shrub and not a creeper as this seems to be. It is most probably the local name for something which they use as a Lufer.

If you want more information you can go to: http://zipcodezoo.com/Plants/M/Magnolia_salicifolia_Lufer/

I would love to see the pics of the sugar cane harvest when you get them.

Gotcha" its just me and my Welsh language. great isn't it.
The lufa or loofa plant.
already changed the name on the blog thanks for that link.
http://zipcodezoo.com/Plants
then type in the common name of the plant. may help others.
once again many thanks.

It seems like you were a bit on the bored side. LOL. Very interesting though.Strange how non of the "native South African" vegies and fruits are on our daily consumption list.

LOL!! Glad we have it sorted out between us Tony!! Two sets of brains are better than one. :)

LOL!! Not bored Jonker. I often get questions which interest me and then I go off in anther direction. LOL!! I think If I had to put marog on here everyone would thing I have gone completely insane instead of just a little bit. LOL!!

How about Ugali and squamaweeki.
the staple diet of the Kenyans.
now that may interest the firefly.

LOL!! And the rest of the world thinks we are crazy Tony as this is a whole foreighn language to them. :) I must admit that I do not know them either. Marog is like a clover which they cook and eat with porridge and smells like licorice.

"...have you ever seen carrots, lettuce, tomatoes etc growing anywhere besides in a garden?"

Things that make you go Hmmm. This is a fascinating gathering of data, and I like the idea of tracing roots (no pun intended) of the stuff we have in our local grocery stores. Of course, the ultimate origin was that they were spoken into existence on the third day of creation by the Lord, but it's neat to see how people later grew different things in different places.

We have wild leeks in our woods hearabouts. They are quite small by way of comparison to the leeks available in our supermarkets, which by the way, have apparently been fostered by steroids or someother illegal substances. :)

I sure have missed your posts and amazing insect photos. Hopefully I can do my blogging thing more and can visit more often. Glad to see you're still doing your amazing work.

This Is My Blog - fishing guy said...

Joan: You certainly were a busy young lady. It looks like your ready yo write a book on something beside bugs.

Hello Craver. This was indeed an interesting exercise. The problem is I am too curious about things like this and always look for answers. LOL!!

I am willing to bet they taste much better than the store-bought ones TB. No wonder people years ago were more healthy than they are now, things like fruit and vegetables were not treated with substances then.

Thanks 2sweetandsaxy!! How wonderful to have you back!! I was just wondering about you the otherday and hoping your job was going well. Dont disappear like this again. :)

LOL!! Got to find ways keep out of mischief Tom or there is no telling what I will get up to. :)

LOL!! I am so curious about things Michelle and find questions in everything I see.

You certainly did do a lot of research on the matter. Here in the northwest, we have a couple of wild cherries, many onion type of plants, a couple of wild white carrots that taste pretty good, and lots of other goodies to explore.

How fantastic to find all those wild fruits and veggies there Bernie. I can see how the American Indians could live well off the land a few hundreds of years ago. It is a pity that so much of this ineresting information has been lost in time.

I did not know there were that many different kinds of carrots. It must drive rabbits mad making choices, LOL. Interesting list you have here though. : )

LOL!! Thank goodness they are colorblind as I am sure the black one does not look very attractive. :) Thanks Ken.

WOW! What a stew pot full of veggies you've prepared for us. Very interesting and informative. Thanks for the links.