I have found a few scorpions now but it is one critter I know almost nothing about.
Scorpions are fascinating animals, though most people see them as potentially deadly killers, a wildly inaccurate assessment. However, it is true that after man himself, followed by snakes and the bees, scorpions cause more human deaths than any other no-parasitic animal. Mexico is one hotspot to watch out for scorpions, as are India, North Africa parts of South America and the USA. 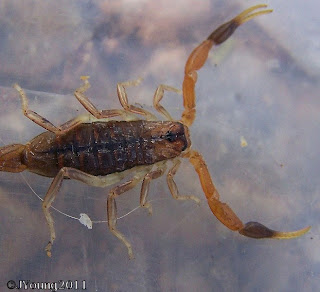 The incredibly small percentage of dangerous species cause death via complex neurotoxins, bringing both local and systemic paralysis, severe convulsions and cardiac arrest, which can all occur within a few hours of being stung. Fortunately, good anti-venoms are widely available and death can be avoided with proper medication. In fact, the neurotoxins employed by Death Stalker scorpions are being studied by scientists researching a treatment for some diseases, including some forms of brain cancer and diabetes. 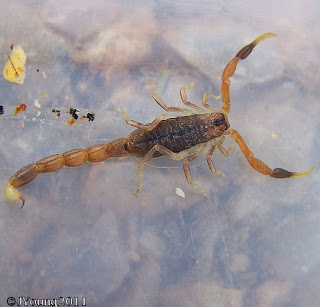 Although only medium-sized, the Death Stalker is one of the deadliest. The extremely potent venom causes extreme pain, fever, convulsions, paralysis, and often coma or death for people stung. The Death Stalker Scorpion is found in North Africa and the Middle East. It prefers a dry climate, and makes its home in natural burrows or under stones. 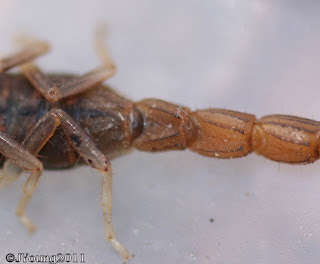 Scorpions can truly be seen as living fossils because they have changed very little in 400 million years of evolution. These amazing creatures have some of the lowest metabolic rates ever recorded in any animal. Most species stay within 1 metre of their burrows and some may spend as much as 97% of their lives inside their burrows. Some species can go a full year without food, and some live without water at all, taking what they need from prey creatures.


Info supplied by: http://www.environmentalgraffiti.com/nature-offbeat-news-ecology-envronment-history/news-savage-scorpion-victim-bad-press
Posted by SAPhotographs (Joan) at 12:02 AM