Family Hyaenindae
With jaws that are the strongest of all animals, they are capable of biting through the thigh bone of a buffalo.

They have an acute sense of smell and have been recorded detecting a carcass nearly two kilometres away.

Thought of as cowards because they are usually seen slinking about with their tails between their legs, in certain areas, hyaenas have been known to attack man and to chase lions away from their kills, thus dispelling the cowardly theory. 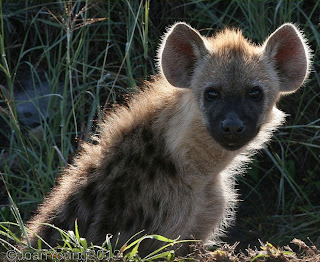 The Spotted hyaena is the largest of the three types of hyaena found in Southern Africa. The other two species being the Brown hyaena and the Stripped hyaena.

Many times these creatures can be seen lying in the mud in order to cool themselves when it is very hot. 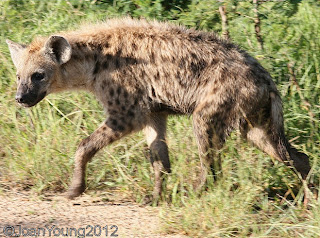 Their forefeet are much larger than their hind feet as it has to carry the extra head and shoulder weight.

The best time for sighting these animals are the early hours near sunrise and then again just before sunset. 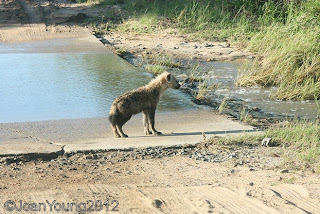 As with most animal species, their behavioural pattern depends on many things such as availability of food, etc. In certain areas hyaenas are strictly scavengers but in other areas, they scavenge as well as hunt for themselves.

In areas where food is scarce, hyaenas are reputed to dig up bodies to survive. 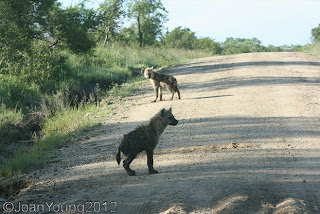 During a patrol of their territory they might come across another pack of hyaena. In order to make themselves look more ferocious, they will raise the hair on the back of their necks thus increasing their actual size. 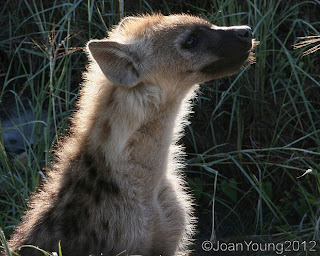