They are one of the most beautiful and fragrant trees we have around I love them in the garden as they come in a wide variety of colors. 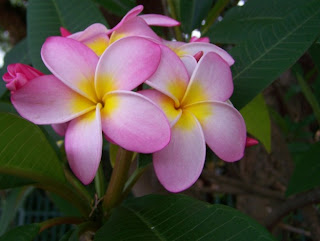 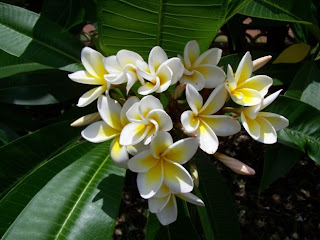 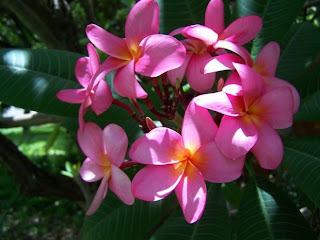 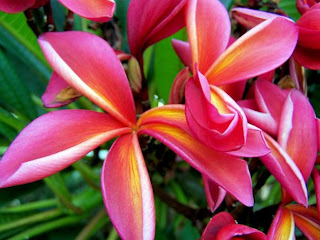 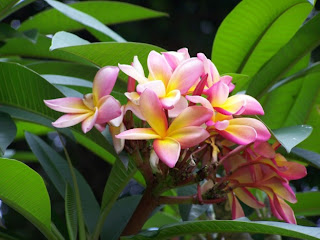 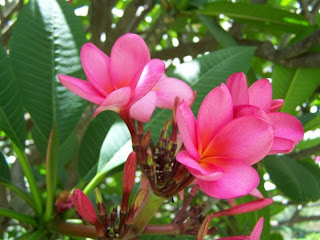 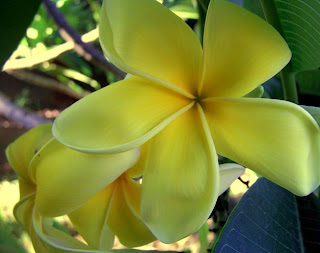 The following interesting information is courtesy of Wikipedia:
Plumeria flowers are most fragrant at night in order to lure sphinx moths to pollinate them. The flowers have no nectar, and simply dupe their pollinators. The moths inadvertently pollinate them by transferring pollen from flower to flower in their fruitless search for nectar.
"Plumeria" species are easily propagated by taking a cutting of leafless stem tips in Spring and allowing them to dry at the base before inserting them into soil. They are also propagated via tissue culture both from cuttings of freshly elongated stems and aseptically germinated seed.
The genus, originally spelled Plumiera, is named in honor of the seventeenth-century French botanist Charles Plumier, who traveled to the New World documenting many plant and animal species. The common name "Frangipani" comes from an Italian noble family, a sixteenth-century marquess of which invented a plumeria-scented perfume.
In Mexico, the Nahuatl (Aztec language) name for this plant is "cacalloxochitl" which means "crow flower." It was used for many medicinal purposes such as salves and ointments.
They are now common naturalised plants in southern and southeastern Asia, and in local folk beliefs provide shelter to ghosts and demons. The scent of the Plumeria has been associated with a vampire in Malay folklore, the pontianak. They are associated with temples in both Hindu and Buddhist cultures, though Hindus do not use the flowers in their temple offerings.
In several Pacific islands, such as Tahiti, Fiji, Hawaii, Tonga and the Cook Islands Plumeria is used for making leis. In modern Polynesian culture, it can be worn by women to indicate their relationship status - over the right ear if seeking a relationship, and over the left if taken.
Posted by SAPhotographs (Joan) at 1:00 AM