On waking up from a night’s restful sleep with only the sound of a lion roaring in the distance to remind one where you are, it is with ease that one rises while it is still dark outside. There is a freshness in the air, and your expectations are high at the beginning of a new day. At first, there is only the slight outline of the trees to make you aware of the sunrise. Like a ball of orange fire, the sun starts to rise over the grassland, time to finish the early morning coffee and head out into the veld (bush). 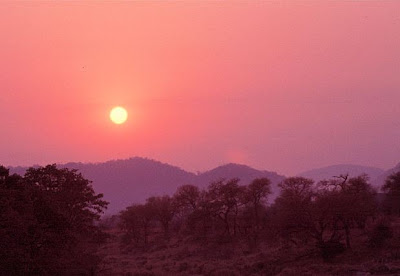 Along a now empty riverbed, a shape that should not of been there makes one stop to have a closer look. Yes!! it IS a leopard trying to hide behind a bush that is barely a half a meter high. She stands dead still hoping that you have not noticed her. Out come the binoculars and cameras, but it is still not light enough to take that good a picture. Still, any picture is all right in your excitement. Just hope that when it is developed you will remember what it was you were trying to see and were aiming at. Now she moves from behind the bush and continues on her way, totally ignoring you sitting there wishing she will come closer. It seems as if she has been in a fight as there are fresh scratches on her rump. Maybe she has was walking across another leopards territory, or maybe she bumped into a male. Leopards are solitary, only on rare occasions will more than one be seen, and that will usually be a female with her offspring.

She disappears into the bush, and one ruefully wishes that we could of followed her to see where she is going. Along the road, we see the last of the nocturnal animals heading for their sleeping quarters. Hyaena with their high muscular shoulders, steadily passes by. Every now and then he stops to sniff the air and then moves on. Their sense of smell is very acute and their round ears serve as a identification for those who are seeing the hyaena for the first time. Black-backed jackal which look like small foxes, settle down under bushes or find unused antbear holes to while away the daylight hours. Jackal will use these holes to have their young in, and the male and female will take turns keeping watch over the cubs while the other finds food and brings it back to the nesting site. 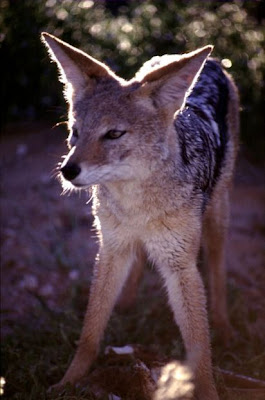 The sun, by now, is way over the horizon and it is going to be yet another beautiful day, but with so much of interest to see, one often misses the gradual shape of things turning gold in the sunlight and then changing to blue as the sun gets higher. Buck jump around in the early morning coolness. Before long, it will be blazing hot, and then they will find shade trees under which to spend their day.

Impala, blue wildebeest, giraffe, zebra and baboons are often seen together. As each species has their own preference in food, they can live amicably together. For example, the impala like the soft new grass shoots, whereas the zebra like the tougher grass, the giraffe eat the tops of the trees, and the baboons eat spiders, berries and when there is a drought, the roots of plants. 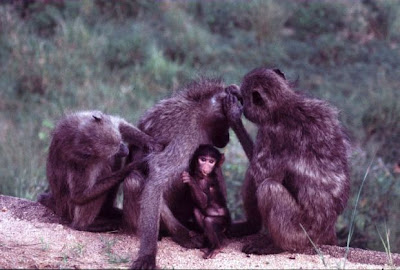 Impalas are able to leap up to a distance of 10-12 meters. They are not dependent on water as there is enough moisture in the food they eat to sustain them. Note carefully the skin of a wildebeest. On their sides it seems as if they have folds in their skin, but look again. It is just the grain of the hair that looks like folds. Very often one sees them standing motionless on top of a slight rise in the ground. This is a favorite place to be on the lookout for danger, but the baboons sitting high in the trees, are also looking out for danger, and as soon as anything approaches, let off loud barking-like sounds to warn the animals feeding below. The male baboons are easily recognizable by the ridge of hair which grows on their backs and necks. The females are often noticed with their rumps a swollen red mass when they are in season. They are also smaller in size and very often have babies hanging below their bellies or riding on their backs.

Zebra foals have brown stripes compared to the more adult black stripes. The foals frolic around close to their mothers for most of the day and seem to climb close underneath mothers belly when the sun is hot overhead. They all love a sand bath which makes their white underparts darker and gets rid of ticks. No two zebra have the same stripe pattern, and so are easily distinguished one from the other. 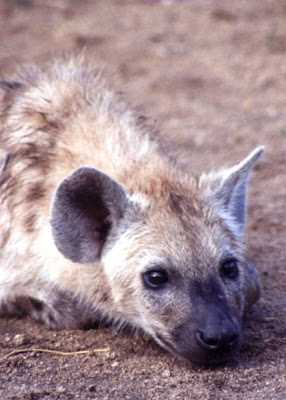 Red-billed oxpeckers are small birds found a lot on giraffe. They ride along where ever the giraffe goes and have a feast on the ticks collected from the grass. Giraffe are two meters tall when born and because of the length of their legs, must make quite sure there are no predators around when wanting to drink water. They can be seen carefully looking around, slowly bending their legs and then having another look around before they actually drink. They have seven vertebrae in their necks, as do sparrows and humans.

A pause for lunch under a shady tree near a waterhole is a lovely way to spend a few hours. During the midday heat, most animals make their way to the water holes for a drink. The funniest looking animal of all is definitely the warthog. I have often heard people say that ‘they are SO ugly, they are actually beautiful.’ It is amusing to watch them rolling around in the mud, also when it is very hot, they go into a pool of muddy water, and just lay there with their noses sticking out. The babies are delightful. They will forage around and then look up and discover that mother is some distance off, with a high pitched squeal, they dash back to be near her for protection. The male warthog has four warts sticking out at the side of his face, while the female only has two. 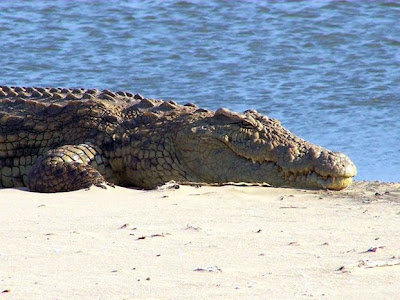 Reflected in a pond, the marabou stork stretch lazily in the sunshine. Birds abound in the veld, and for the birdwatcher, every size and colour is available. The smallest of these birds are surely the waxbills and finches. Both these species fly together in great flocks, and one is only aware of them as they fly from place to place over the grassland. Some birds are so well camouflaged, that although one can hear them calling, it is very difficult to actually find them as they sit in the trees and bushes. Of the largest species (besides the ostrich), there are the kori bustards and the secretary birds. The kori bustard has a very distinct shape and the feathers at the back of the head, stick out at an angle. Although the secretary bird feeds on the ground, they make nests at the top of thorn trees where they and their chicks are fairly safe from harm. Many birds such as the masked weaver strip off the leaves off the end of a branch and then build their nests on this tip. If any snake approaches the nest it is easily seen and a loud cry is set up warning them of approaching danger.

Near to and around the water holes, one usually finds waterbuck. They know that most predators do not like to go into water, so if they are chased, they will head into the deep water for safety. They are easily distinguished by the with ring around their rumps. They are of the larger buck species and have very long, thick hair. Like most of the buck species, only the males have horns. 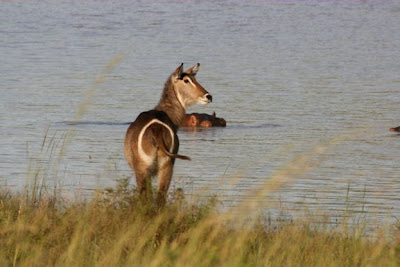 Only in certain parks are rhino seen. The best way to tell whether they are white or black rhino is to see how they carry their heads. The white rhino which eats grass, carries its head low on the ground and has a straight flat mouth. The black rhino which eats leaves off bushes and trees, has a round mouth. Many people think that they will charge at anything which is red, but this (as for buffalo) is not true. They are colour blind and can only see images in black and white.

Hippopotamus have the thickest skin of all the animals, 5cm. They are not often seen out of the water as the sun dries out their skin and causes them great discomfort. They come out of the water at night to feed on the grass banks, or for short periods if it is overcast. The crocodile and the hippopotamus live fairly well together as once again they feed on different food. Crocodiles love to lie on a sank bank and bask in the sun. Often they are seen with their mouths wide open. Only their lower jaw moves, and they have a flap which covers their throat while they are under water.

Another day approaches its end and as the sun starts to get lower on the horizon, it is time to head back home. After a long, hot day outdoors, there is nothing nicer than a refreshing shower to wash away the dust of the day. A few minutes spent outside watching the last rays of sunlight disappear, a good log fire, supper and then time to sleep. Once again it is time for the night creatures to come out of hiding. The nightjars and owls calling, the distant roar of the lion, then all is still as we drift off wondering what tomorrow will bring. 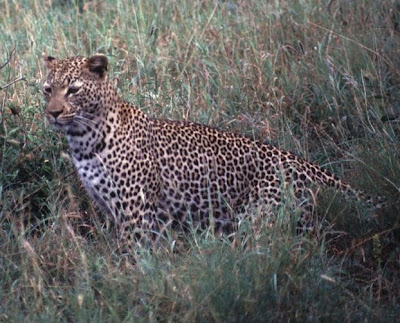 Just like being there with you Joan. Love it. So much wonderful info!

I lived this with you, thanks for the memories Joan. Keep well Diane