Home away from home - Part 1

I have decided to post a story which I wrote of one of my trips to a wildlife reserve called Kruger national Park. Please bear with me, as I am not a writer by any means and I sometimes forget to use American spelling as we use British, but you might find this interesting ......... 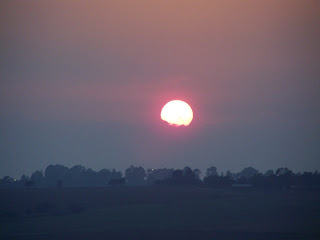 I left home at 4 am on the way to a few days out of the rat race to find sanity again in the bush. It is warm and all the windows are open to allow the fresh breeze to circulate. Everything is packed, food, cameras, camping gear and most importantly, binoculars. An hour down the road, the sky starts to lighten and an hour after that, the sun peaks over the horizon. Another glorious day in Africa, but best of all, no work today. No cars, no telephones, no noise! A short stop along the way for breakfast (and the toilet of course) and arrive at the entrance to our most popular game reserve. Ah! What a feeling of peacefulness! It is like coming home after a long time away. The cameras are placed in special foam on the seat next to me. Each camera has a different size lens and it is specially cut out in the shape of each camera so that they are close at hand and will not fall or bump each other. Coffee is made and put in a thermos. Now I am ready to begin my day. 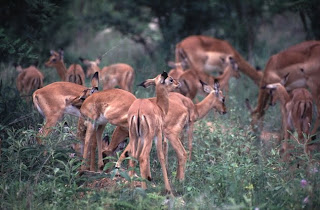 The first thing I see is impala. They are a medium size antelope and there are about 28,000 of them in the park. They are the favorite prey of cheetah and leopard and it is beneficial to watch the herds as they will give you a good indication if predators are around. The females all gave birth in November and December, so there are plenty of young ones around who are very actively jumping and running around in the cool of morning. Later on, they will be under the trees trying to find a cool shady spot to stay in until the sun goes down. But for now it is amusing to watch their antics. I feel very sorry for the males as they only have a six week period in June/July when they mate with the females, then they run around most of the time chasing other males away and this does not allow them much mating time. However, they seem to get the job done eventually, but by the end of this time, actually have black rings around their eyes from fatigue! What an advantage us two-legged creatures have!
I spot two young males play fighting and I grab my camera to record the fight, and it reminds me of the first time I brought my parents to the park. We had stopped to admire a huge herd of impala on either side of the road. “What a lovely herd of impala” I said. “Where” asked my dad. “Here, all around us” I said, impatiently indicating the herd, thinking he was mad not to see them. “Oh” he replied “all I see is biltong” I had to laugh at that. I see some blue wildebeest close by and across the road, zebra. These all live in harmony with one another. They eat different things and each species increases the others awareness to danger.
The zebra walk in single file wherever they go. Like horses, they have a gestation period of a year and can calve at any time during the year but with a peak in the springtime. No two zebra have the same markings and this is used by the young to identify their mothers. Some are grazing peacefully while others roll around in the dust to get rid of ticks and fleas. 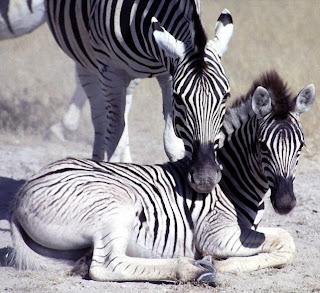 I pour some coffee, and start slowly down the road again. It is too late to look for predators as they like early mornings and late afternoons to be active and so I will look for them this evening. At the moment I am looking for elephants. They are my favourites and always the first animals I look for.
There are more warthogs and impala, with a small herd of waterbuck grazing nearby. They are one of the larger antelope species with only the males having horns and standing at about 1.7 m tall at the shoulders. I move on and see zebra. The earlier settlers in South Africa tried to use them in place of donkeys to pull their carts, but were found not to have enough stamina as they can only run for about ten km’s. They are fairly dependent on water and are never found far away from it. My eye catches sight of a rhino. It is a white one with a square lip for grazing grass. Rhino horn is made up of a very hard fibre similar to our fingernails. If they have babies with them, black and white rhino can easily be distinguished as the white rhino herds her young in front of her, while the black rhino baby trails behind. The white rhino also holds its head close to the ground while the black, leaf eating rhino, carries its head higher. They are Africa’s third largest mammal and their only enemy is man who has hunted them in large numbers. This one is quietly grazing and comes very close to me. They are extremely short sighted but make up for it by having a very good sense of hearing. 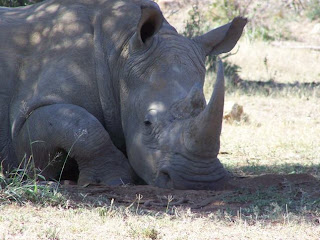 I see beautiful Starlings feeding and come across some ground Hornbills. They are the largest of the hornbill species and stand at about a metre tall. They are black with a bright red crop. The crop is yellow (almost white) when born, turning orange and then red as they grow older. They walk along the road looking for insects, snakes, centipedes and I have even seen them trying to get at a tortoise. Stunning creatures with very long eyelashes, they are wonderful to see.
Part two coming soon………
Posted by SAPhotographs (Joan) at 12:04 AM

Love your story. It's almost like being there- REALLY!

A great post will keep part 2 until tomorrow :-) Diane