Home away from home - Part 2

Nearing midday, and not having seen hide or hair of an elephant, I am about to follow the example of the animals and head for a shady spot. One of my ideal camps is nearby and I head in that direction. The camp is situated on the banks of a river with a lot of game feeding there and at night, if I am lucky to get a camping spot near the fence, I can hear the animals walking past. There is also a handy pool in which I can lie and soak in like a hippo. Just before reaching the camp, I stop at a waterhole. There are hippo, crocodile and many species of water birds. The crocs are mostly lying on the sandy banks with their mouths open in order for the slight breeze to cool the mucus membranes in them and so cool them down. Crocs are fascinating creatures which can slow their heartbeats down to four beats per hour and this allows them to stay for a long period underwater. I learnt long ago not to trust quiet looking pools in the middle of nowhere. These would be ideal bathing spots in areas such as Botswana where there are no showers or other water. I would sit watching the pool for a long, long time before venturing into the shallows of one to have a VERY quick wash. Mostly I would try to find a place where water runs over a fairly large area of shallow, rocky surface as this would be safest. The alternative is to remain stinky for another day until a suitable place is found or else make do with a portable shower which has hung outside in the sun while driving. A grassy spot, shower hung in a tree, stripped naked, and wow! The luxury of being clean again! 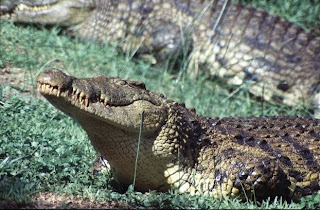 Not much is happening here because of the heat and I will return later, so I head into camp and check myself in for the night. An hour by the pool, a hamburger and coke, and I feel like a million dollars again. I set up camp in a suitable spot next to the fence and need to go for another swim. Four o’clock and I head out to find those elusive elephants. They are here somewhere, I know they are!
Two giraffe are bumping heads in a sparring session. Once again I get fabulous shots as the bush is fairly open here and good for photography. Giraffe have the second longest gestation period of all land mammals, eighteen months. Giraffe and camels have a distinctive walk. Unlike other animals, they move the right side two legs then the left side two legs, where as others use alternate sides. One giraffe is chewing what looks like old buffalo bones which are an additional source of calcium. There is a baby of about a week old. I know if I sit quietly for long enough, it will come closer as they are very inquisitive. Anyone who does wildlife photography knows that the greatest asset in this line of work is patience. I get into position where I am comfortable (using a window mount for my camera), and prepare to wait. The only thing moving are my eyes as I keep track of the youngster and also watch the continuing battle between the two males. Forty five minutes goes by, they have forgotten I am here, but the baby has started to edge closer and is now halfway between its mother and the car. 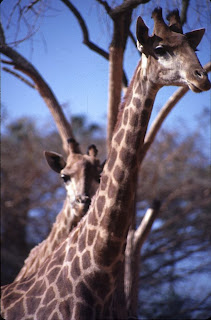 Then I smell it…….the unmistakable smell of elephant! They are so quiet, walking on their toes, that one always smells them first. The giraffe are forgotten and I whip around looking for the elephants. The giraffe flees back to the comfort of mom’s side and I see a small movement behind some bushes. Yes, there he is. A big bull about to pull a branch down off a tree. These mammals must eat in the region of 300kg per day, this includes bark, leaves and grass. What an enormous male he is. I get the camera going. He is about 20 yards away. His tusks are huge and he must be at least in his 60’s. I try to see if he has mates but cannot find another one, but that does not mean they are not there, just that I cannot see them for now. The males are usually loners or with two or three other males. They only join the female herds for mating periods and believe me when I say this is quite a sight to see. On the rare occasions when I have, I actually forgot to take pictures!! He finishes his branch and reaches up for another coming more into the open and closer to the car. I hear something in the bushes on the other side and turn to find another bull not ten yards away coming straight in my direction.
This elephant is HUGE. My car almost fits under his belly! I sit as still as I can, camera forgotten (again) he is closer. I look up into his mouth as he passes right in front of me to join his companion. Camera! Grab the camera! At last I get the shots I am waiting for. He joins the other elephant and the two start grazing on the grass not ten yards away. Thank goodness I have a quiet camera! They sure do smell and as fast as they put food in their mouths, it all comes out at the back. They move slowly away and I start to breathe again. Ten minutes later they are gone from sight, but I know they are still close by. The giraffe have all but gone too and I decide to move on. My first sighting of elephant has been good and hopefully there will be many more before this trip is over. 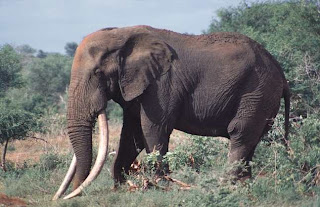