Oh dear!! I thought everyone would recognize this as a fern frond...... but this week has been fun. Thank you everyone for taking part.
Giant tree ferns flourished when dinosaurs still roamed the planet while others are more modern, undergoing active adaptation to specific environments. They mostly have a distinctly primeval appearance with a tall rhizome/trunk holding a palm-like group of fronds, the fern's leaves. Much of what we know about their origins is based on an extensive fossil record, with the earliest fossils dating back some 385 million years. 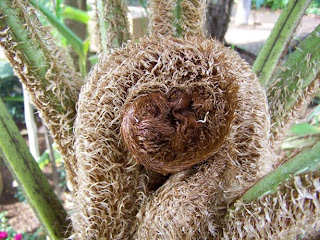 There are about 600 different species of tree fern around the world. Most of the ones here grow to a height of at least 12 feet (4 meters).

Tree ferns often have toxic as well as therapeutic properties, some of which have been explored for antiviral and medicinal uses. Oil extracted from ferns was a popular cure for internal parasites in Ancient Greece; in Fiji, infusions made from frond material of Cyathea lunulata were used to treat headaches or to shorten labour, and in Micronesia, fronds of Cyathea nigricans were used as a contraceptive. 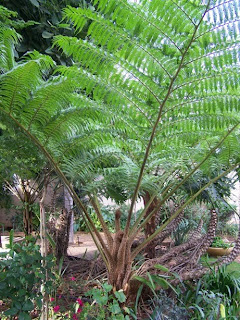 Tree ferns have also long been associated with mystical animals. The tree fern Cibotium barometz, from China and Malaysia, is a short fern with a distinctive furry trunk. The rhizome, which is turned upside down, was mistaken early on as the "vegetable lamb", a strange beast that was thought to be half animal and half plant. Stories of a vegetable lamb, or organism sharing both plant and animal characteristics, date back to the time of Christ. 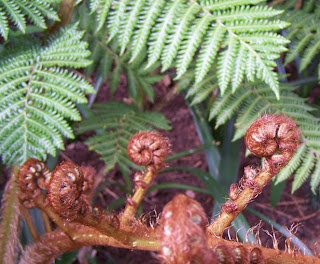 Posted by SAPhotographs (Joan) at 6:11 PM