Home away from home - Part 3

Now is the time to start looking out for predators, especially leopard. This is one animal which is extremely hard to photograph as you always only get glimpses of them and before you can pick up a camera, they are gone. The only photographs I see of leopard are where people go to see tame ones. But I still live in hope of that exceptional shot. Also, in a place like this game reserve, if a car sees you stopped at something and it is lion or leopard, within ten minutes the area is packed with cars and you cannot get that shot anyway with everyone talking and people leaning out of their cars. But we all have our dreams. I drive very slowly, at times taking an hour to do five or six kilometres. Game has to be found and a lot of it is being in the right place at the right time. A trick I learnt years ago was to keep on checking my rear-view mirror. Some of the glimpses of leopard I have had have been like this as they lay in wait until you have passed and then dash across the road. Someone has ridden over a large ten foot python. It is on the road and I can see where a tyre (tire) has gone across its neck just below the head. There is an eagle next to it having a good meal, and I get some good photos of the scene. By morning the python will have disappeared altogether, taken by jackal or hyena. Now is the time for them to start scavenging as well and I keep a sharp lookout for any small movement. It has cooled down and the animals are starting to move down to waterholes to drink before it gets dark. 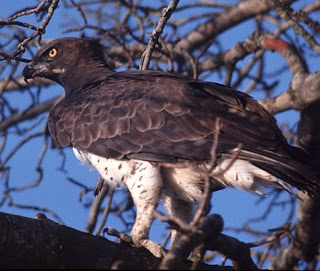 Something!! Yes, a slight movement caught my eye. I back up slightly and get out the binoculars. What was it I saw? I scan the area. Nothing…no…. look again… another small movement. Lion! I see him now. He is lying down and the movement I saw was his tail twitching. I switch off the car’s engine and he raises his head to look at me. He is perhaps 40 yards away. I snatch up the camera but he is hidden by the grass. His head goes down again and I train the binoculars on the spot. Is he alone? Are there more hidden in the undergrowth? Lions are found in three categories: a mating pair which will stay together for three or four days, mating every twenty minutes and not going hunting during this period; one or two males with their pride of females and young; or two to four youngish males, having been kicked out of their pride, roaming around looking for a territory of their own or one to take over. Males taking over a territory will usually be related to one another and will kill any babies in the pride they take over in order to establish their own offspring. The mane of the males is there to protect him during this fight for dominance. I spy more movement to the left of the male I saw and see another tail. I am determined to get a couple of good shots and wait patiently for some movement. A car with four people comes along, slows down and tries to see what I am looking at, but decides that there is nothing of interest there and passes along. There is game in the area not far away. Some impala are grazing some distance away. I see a small herd of waterbuck with their distinguishing white ring around their rumps, heading for the river. Still I wait. More cars, which look, and move on. Everyone knows this is the time of day for predators and are out in force. An older couple finally asks me what I am looking at and I explain about the two tails and one head I have seen. They strain to see where I am pointing and eventually are rewarded by seeing a tail movement as well. It is now getting late and almost time to head back to camp. More cars arrive and the area is piling up. The one male has raised his head again and now decides to stand up and show himself. Cameras are clicking, (even a few with cell phones taking pictures) but for me it is already too dark and I leave to get back to camp. 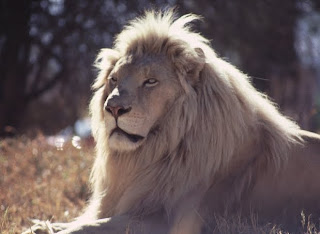 Night is falling fast, time for a piece of steak on the braai, a salad then shower and settle down to listen to the night sounds.
The moon is only half and I am glad as this means the night sky will be full of stars. Time to reflect on an altogether fabulous day and wonder what tomorrow will bring. As long as I have worked there, no two days have ever been the same, with something new to learn and wonder at every day. The steak is doing fine, and I count satellites in the sky. I hear zebra and baboon barking in the distance. Predators on the prowl. Monkeys and baboons live high up in the smaller branches of the trees as they know leopard cannot get to them there. Supper over and I curl up on my mattress to listen. When it is warm, I tie my mosquito net in a tree, put my mattress under it and sleep under the stars. In the moonlight I can see a hyaena walking up and down the other side of the fence hoping that someone will throw him some bones, but he is out of luck as most people know that they are not to feed them, but he still paces in hope. Hyaenas are nocturnal. They have enormous front paws to carry the extra weight of their head and shoulders. In many areas they are hunters but here they are mostly scavengers, taking the leftovers from the lions and cheetahs. If something should cross their paths, they will kill it themselves but this rarely happens. They have exceptional sense of smell and have been know to detect a carcass a mile away. 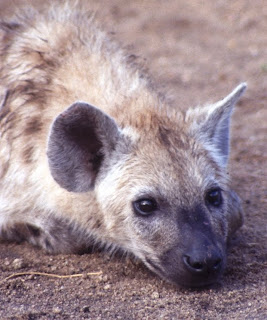 Part four coming soon……
Posted by SAPhotographs (Joan) at 12:02 AM

Oh wow, love this story Joan. Almost like being there! Thanks!