Home away from home - Part 5

I spot some elephants crossing the road ahead and leave the cheetahs. It is a breeding herd of about 15 with a couple of small ones with them. Babies up to a year old can walk under the bellies of their mothers, but these look to be about two or three years old. They are heading for the water to drink. Their trunks can hold up to 9 litres of water at a time but they do not drink through them. Instead, squirt the water into their mouths. They drink up to 200 litres of water per day. The herd is led by a female which has a square forehead and can be distinguished from the males who have a round forehead. They are the only mammals which grow throughout their lives, even their eyes. I park on the bank and spend the next hour taking three rolls of film. They are great swimmers and in Zimbabwe are known to swim from one island to another on a regular basis when searching for food.
Now it is getting too hot and I go to a nearby picnic spot to sit under the trees and have some lunch. There is a very tame female bushbuck here which wanders around totally unafraid of humans. I watch her as she grazes. To me, they are the most beautiful of all our antelope species. She has white dots on her rump and seven or eight white stripes down her back with a white patch at her throat. There is also a yellow-billed hornbill feeding his female through a hole of a tree. At the beginning of the season, the male collects mud and seals the female into this hole. She molts completely and uses these feathers to line her nest for the eggs. After he has sealed her up, he feeds her through a small slit just large enough for his beak. 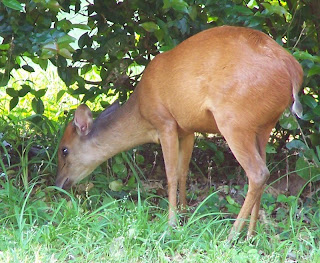 No swimming pool here so I immerse myself under a tap, I know that in this heat, I will be dry in twenty minutes. Moving on, I see giraffe. Strangely, they have the same amount of bones in their necks as we do, only MUCH larger of course. A few of them are getting a drink. They have a special system of valves in their necks which stops the blood going to their heads when drinking. They are very cautious as they are at their most vulnerable in this position. There are wildebeest, zebra and more impala. Impala have been measured at attaining twelve metres in one jump. The brown patch between the horns of the male is actually a gland which they use to mark their territory. The females have what looks like a tuft of brown hair low down on her hind legs. This is a gland used in marking the grass as she walks through it so her offspring is able to follow her and also know by the individual scent, which mother is his. No matter how many impala I see, they are still fascinating to watch.

There are vultures circulating high in the air and my thoughts go back to last night’s lions and I wonder if they managed a kill, but these do not seem to be landing, so there cannot be any food nearby. I have spotted a pair of fish eagles in a branch over the river. To wake up in Africa and hear their call, is probably one of the best ways to start your day (no alarm clocks for me thank you). A small jackal is running in the distance and I watch him. Summer is breeding time and he is probably on his way to find food to take back to the female and young at the den. The male and female take turns finding food while the other stays with the cubs. They will kill smallish prey such as guinea fowl but usually can be seen at a kill after the lions and hyaenas have finished. That is, if they can scare the vultures away. I am heading in the direction of the camp and start looking for lions again, instead I see a hyaena stopping every now and then to sniff the air. Hyaena cubs are pitch black when born and have a very high mortality rate. For every litter of four or five, only one will grow up to adulthood. By the time the cubs are about four months old, they have started to lose the black and by six months have all their usual markings. They have the strongest jaws of all animals, being able to crush the thigh bone of a buffalo. There is a Secretary bird searching for food in the grass. When they spot something, they will run over to it and stomp on it to kill it. They eat snakes, grasshoppers and any other insect they can find. 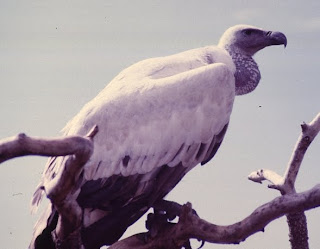 A family of warthog is grazing. Someone I knew always said that they are so ugly, they are actually beautiful. One is on his front knees digging up roots. There are four little ones who stick close to mother’s side and if you ever want a good laugh, just sit and watch them for a while. They have a cute habit of jumping around like pop-corn. I guess it is good practice for when being chased by leopard. Because they are so small and the grass is usually taller than they are, they erect their tails when alarmed and this allows the one behind to see where the others are running and so stay together. Warthogs can be very vicious and there is a case recorded where one ripped a leopard open with its tusks while defending itself. 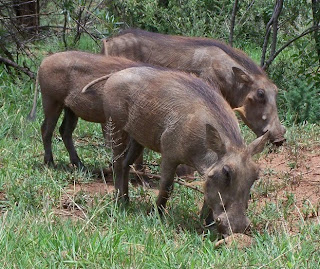 Part six coming soon……
Posted by SAPhotographs (Joan) at 12:02 AM