Home away from home - Part 9

On the road again, I go and check on a tree I know where there are a lot of brown-headed parrots nesting. At this time of year, they are many small ones and I watch the activity. I have seen snakes in this tree going after the eggs and babies, but there are none now. It is amazing how much noise they can make. The road takes me partly along a river and at a lookout, I stop to watch the hippos. They have a very thick skin of about 5cm and this accounts for one third of their body weight. For their size, they are extremely fast runners and in Africa, cause more deaths to humans than any other animal. In some of the central African countries, their dung is used to bait fish traps. A hippo can remain submerged for about five or six minutes. There are baboons sitting in the shade. They have larger canine teeth than cheetah and are estimated to live about forty years. The youngsters chase each other around and others are busy feeding on the flowers of a bush and grass seeds, but I also see them looking under rocks for anything that might be hidden there.

There are a lot of kudu in this area. They have a distinctive hump on their backs and five or six vertical white stripes down their sides. In proportion to their heads, they have extremely large ears. I spot some female Nyala which do not look anything like the males. They are almost an orange colour, also have white stripes down their sides and are sometimes seen amongst the impala herds. The males are much larger and are seldom seen but look more like kudu. At a waterhole, I find a hyaena lying in the water to cool down. They are the largest of the three types of hyena found in South Africa, the other two being the brown and stripped hyaena. 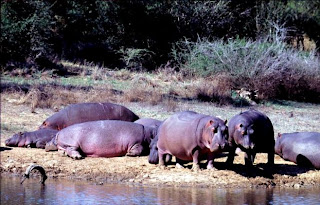 Many giraffe around feeding on their favorite food which is Acacia trees. This is eaten thorns and all. They have the longest tongue of all mammals and use them to strip the ends off the branches. It is always easy to see if giraffe are in an area as the tree branches are bare at about the four / five meter height. It is estimated they can reach a speed of 55 km. Giraffe and rhino are not found in areas where there are Tsetse flies. There is a lovely bird hide overlooking a dam and I stop there to watch the Jacana, black Crakes, kingfishers, herons and Darters feeding. This is a wonderful place to spend a couple of hours. It is starting to get late and I head for the camp. I am looking for lion and leopard now and hope for a sighting of either before the day is out. But I reach camp not seeing either. I have decided to go on a night drive and hurry to get on the truck. We head out onto a side road not usually used by normal visitors to the park. We have spot lights and soon a Spotted Eagle owl is seen. He has pink eyelids and sits very quietly looking for prey. Next we stop to watch a Serval. They are large animals of the cat family with very long legs and big ears and strictly nocturnal. He is busily hunting for rats and guinea fowl. We come out behind a dam and see two white rhino feeding on the grass around it. Our light reflects in the eyes of impala, wildebeest and zebra and we see another hyaena slinking off somewhere. Suddenly there is a loud cry of “Lions!” It is a huge pride, one of the biggest I have ever seen and count 22 of them. There are three males, many full grown females with their adult daughters and cubs ranging from two years down to six months. Camera flashes are going off as we sit and watch them. They are not out hunting so I gather that they have eaten recently. Or maybe some of the pride is out hunting while these wait around looking after the cubs. They mostly hunt giraffe as this is large enough to feed the whole pride and they will not have to hunt again for a few days. The females do most of the hunting and then call the males to the kill. Males kick out of a pride because of old age or illness become man-eaters as they are unable to hunt successfully for themselves. One time when I had a group of people with me and we were at a small camp in a private game reserve, we had got back to camp and I dashed to shower and came out to go to the kitchen in order to see how supper was getting on. There coming through the gates was this lion. No knowing what else to do and not wanting my guest to get mauled by a lion, I started to stamp my feet and gesture with my hands and said “Shoo, shoo” Luckily he turned and walked back out the gate. Some of the guests came out and saw him disappearing, called the others, and we all piled back into the Kombi and followed him down the road. My camp attendants told me that this lion was shot by wardens two days later as he had become a man-eater and killed and eaten some people in the area. To this day I cannot believe that I had said “shoo” to him. I guess he could not stand the crazy woman making a noise and would not run from him and decided I would not be tasty anyway. Our night drive continued, but after spending so much time looking at the lions, we did not have any for other game viewing. I for one was satisfied with having seen the Serval. 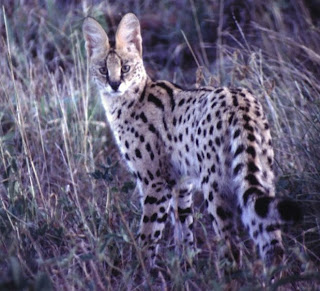 I put some sausage on the braai (barbeque) and together with the fruit left over from last night, have a great meal outdoors. After a shower, I spend some time sitting on a bench watching the impala drinking at a waterhole just outside the fence. The young impala will reach there full height within three years, but I wonder how many will be killed by predators before then. A jackal comes down for a drink then I watch him disappear into the long grass. I head for bed and spend another peaceful night sleeping outdoors.
Part ten coming soon………
Posted by SAPhotographs (Joan) at 12:02 AM