Home away from home - Part 6

The day is drawing to a close and I head for camp, I need to pack my things tonight as I am going to another camp tomorrow. A troop of baboon crosses the road also heading for their sleeping tree and I spot a few babies amongst them. Babies up to the age of three months old hang beneath the belly of the mother while she walks. The next three months are spent hitching a ride on her back sitting at the base of her tail. They will eat almost anything, this includes insects, fruit and birds eggs.

Wow! A bonus! A very large herd of buffalo! There must be at least two hundred of them. The herd consists of males, females and young. They are moving to the river for a drink. I stop and watch them and once they are drinking manage to get some nice shots. Both males and females have horns and they are usually found not far from water in which they wallow to keep themselves cool in the heat of the day and also to encase themselves with mud to get rid of ticks. I get out the binoculars and scan the area. Two lionesses are following them. No, there are two more! They are definitely hunting. I watch as the two pairs join and lay down, then one walks away and starts to circulate to the other side of the herd of buffalo. A fully grown buffalo can easily be brought down by a pride of four females and I watch anxiously to see what happens. But it is almost time to get back to camp and wish they will hurry up as I would like to see the hunt. The single female has disappeared and I try hard to find her again. The road I am on it slightly raised from the level of the river so I have a fabulous view. If only I can see where she has gone! She is the color of the grass and eventually I spot her. She has crouched down and is eyeing the herd. She crawls forward on her belly still keeping out of sight. As yet the buffalo have not noticed the lions as there is no breeze to take their smell to them. Then a younger buffalo moves away from the herd and she is up and running. The herd starts to scatter in alarm and heads straight towards the other three females which are hidden in the grass. Then these females are joining the chase. The lone female catches up with the buffalo and jumps on its back. It nearly falls with her weight but manages to keep running. The other lionesses catch up and all four are on the buffalo. There is a great dust cloud hanging in the air from the fleeing buffalo and I cannot see properly. They vanish behind a bush and although I sit and wait with my eyes straining to see, they do not come out. My goodness, that was worth seeing! But now I have to make a dash to camp, if I am late at the gates, I will be in trouble. What a pity I cannot watch anymore. The herd of buffalo have gone. I am sure there must be more lions in the pride and expect the male to join them feeding, but I have to go. 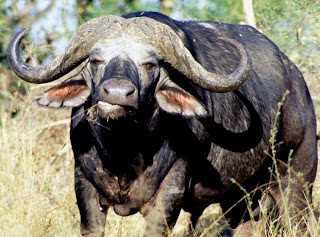 I get to camp just in time and decide to buy something to eat rather than making it, I pack most of my things and after a long cool shower, sit and watch the stars before falling asleep listening to the night sounds.

The night is uneventful, but after the lions the previous day, it is just as well. Enough excitement for one day! Packing in the mattress and mozzie net, I head out for my favorite camp. This is best of all for photography as it is not so bushy, but it is a long drive and will take me most of the day. I head past where the lions were. There are hundreds of vultures sitting in the trees in the area, a lot of jackal and a few hyenas. These are the cleaners of the veld. By the time they have finished, there will be nothing left but a few bones. There is no sight of the lions and I guess they got chased away by the hyenas who are their mortal enemies. Some hippos are wallowing in the water. Their Greek name is derived from a word meaning “river-horse” (they do not look horse-like to me, but then, I am not Greek) Because of the sensitivity of their skin, they do not come out of the water to feed during the day. Mating takes place in the water and is a funny sight to see. They have a single calf which is born in the water. After mating, the female will chase the male away. They are found in two groups, females and young together, and all male groups. Hippo’s tusks are considered to be finer ivory than elephant and have been widely hunted for this reason.

It is a good place to have my morning coffee and I sit watching all the activity. The jackal, hyena and vultures are scrapping over the carcass, each one going in to grab a mouthful when it can. Naturally it is packed with cars so one can hardly move. 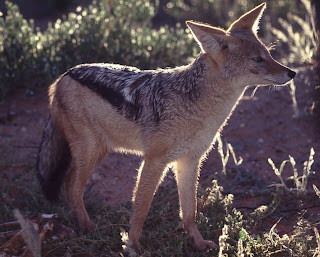