Home away from home -Part 8 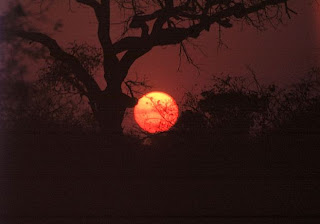 Nearing camp, there are giraffe standing perfectly still and I know they have see a predator but the grass and the bushes make it impossible for me to catch a glimpse of what they are looking at. I switch off the engine and wait. Maybe it will come more into the open. Still I wait. Eventually the giraffe go back to eating and I do not find out what they were looking at. In camp, I set up my mattress and mosquito net in a corner and head for the showers. I take a stroll over to the shops and decide to have a healthy meal tonight and stock up on grapes, peaches, cucumber, tomatoes and a nice pineapple and cheese. The bats are coming out of an old building and I stop to watch them. It seems as if there are thousands. Later one when it is dark and there are lights on, I watch them making a meal of the insects flying around a light near to me. I am picking on my food while watching them and after a trip to the bathroom, curl up for the night. I smell elephant, but it is too dark to see them. Hyaenas are howling in the distance. I hear a rustling in the bushes nearby, but nothing is visible. It is good to relax after the hot day and I soon fall asleep only to awaken some time later by the sound of lions in the distance. Rising early to have my coffee and rusks, I decide to take a circular route which will put me at another camp by lunchtime. I wonder what the day will bring. There are small Steenbok. They stand as till as statues when danger threatens and hope that this will make predators miss them. They mate for life and will only take a new partner if one dies. They are small enough to be able to get all their moisture from the food they eat and so are found all over the park as they are not dependent on water. I watch the young impala again as they dash this way and that playing what seems to be a game of tag. 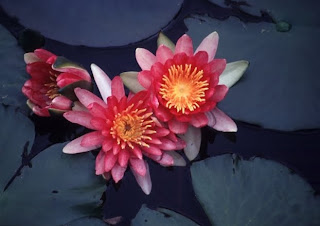 The male buffalo wallow in a small pool of water left over from the rain, and a herd of kudu graze peacefully on some bushes. The kudu have long twisted horns and there is a statue of two at one of the camps. They were found dead in the veld with their horns entwined. Probably during a fight for females, their horns got lock and they could not get them separated. There is very old male elephant, he is very thin and can hardly feed himself. I heard later that he died about three days after seeing him. In certain areas the elephants are prone to a disease which paralyses the muscles in their trunks, the common name being “floppy trunk disease” they then die of starvation as they are unable to feed themselves. A pride of lions are lying on the road but there are a lot of cars and I go past. People look at me as if I am mad. How can I possibly NOT stop for lions? Some people go there to see only lions and classify their day by this alone. Some will tell you that they saw nothing for the day, meaning “no lions” they do not take much interest in anything else. I stop to look at some spider webs which are highlighted against the background of the sun. It is fascinating to watch them spin these webs, each species of spider building theirs differently. They climb up a bush and let the wind carry them across an open space while dangling by a thread of silk. When the have built this first thread they can now complete their spinning. This one belongs to the beautiful Golden Orb spider which is black with yellow bands. There are huge balls of what looks like white cotton wool in some of the trees. They belong to a family of jumping spiders which the baboons are very fond of eating. There are thousands of eggs in each ball. Coffee time finds me at a water hole and I decide to spend some time here watching the coming and going of the animals. I set up my camera and wait to see if anything interesting might happen. There are all kinds of animals in the vicinity. One elephant seems to think that the water hole belongs to him and chases the impala away. They wander around and try to come back but he squirts them with water. It is the first time I have seen such behavior and wonder where he learnt that trick. It is amazing when you watch animals to see how many things they do are in some way related to human behavior. Nothing too exciting and I set off to my lunch destination. This camp is built high on a hill with an excellent look-out point overlooking the river. There are a lot of elephant plus all the usual species of animal. I get a Creamsoda float from the café and sit watching everything going on below. There are many eagles flying around. I spot the v-shaped tail of the yellow-billed kite and watch as it floats in the air not seeming to ever flap its wings. There are Weavers collecting scraps of bread that fall from people’s lunches, Buffalo weavers, Starlings and sparrows. The one thing in the bush is that there is always something to see. I watch some ants which are careful to avoid antlion traps. These small bugs make a cone type trap and if the ants fall in, they cannot get out. The swimming pool is calling me and I go for a dip to cool down. It is peaceful here and the though of work does not even cross my mind. But tomorrow at lunch time I must return to civilization. 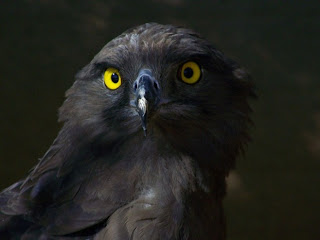 Part nine coming soon…….
Posted by SAPhotographs (Joan) at 12:02 AM