Home away from home - Part 7

I take a rest, and a coffee break at a lookout point set high up on a hill. Scanning the area, I see elephant, rhino, giraffe, impala, kudu and a pair of Klipspringers. Klipspringers are small antelope which are usually found in pairs, sometimes having a youngster with them. Their hooves are specially formed so that they actually walk on their toes. This enables them to get agilely around the rocks on which they make their homes. Males mark their territory by using a preorbital gland situated in the corner of the eye. A twig is carefully inserted into this, and a sticky black substance is left behind. Further down the road at a small dam, crocodiles are lining the sandbank. Adult crocs have no natural enemies except man but when born, they are preyed upon by Marabou stork, mongoose and eagles. There is a leguan walking along the banks, probable looking for crocodile eggs. It is our largest lizard and can grow up to two meters in length. I once saw two brown snake eagles trying to catch one of them and once again was so enthralled at the sight, I forgot to take pictures. There are banded mongoose on the rocks below me and I think of the time in St Lucia where we gave them boiled eggs. That was extremely funny! Mongoose usually shoot eggs they find backwards with their hind legs in order to break them on a rock. Can you imagine what was going through their minds when these boiled eggs would not break. They actually turned themselves in circles and over backwards trying to get them broken. Nasty aren’t I! But it was fun.

Lunch time and I stop at a picnic spot for ice-cream and something cold to drink. It is thirsty work being in the bush. When I go to places like Botswana, I usually take cases of Coke or Sprite with me as there is no fresh water for miles. What water I have turns green after the first week and is only fit for boiling, so I have learnt to drink warm, actually HOT Cokes. If I am lucky, I can find a stream to put it into for a while to cool it down a bit, but not most of the time. I decide to take bit of a catnap and settle down under a tree. 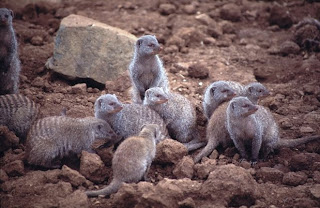 Refreshed, I buy another cold drink and on the road, the first thing I see is an elephant leaning against a tree fast asleep. These huge creatures cannot lie down after the age of about eight years old as their weight would crush their ribcages. They only sleep about four hours out of every 24 and then in short naps. The rest of the time is spent eating. Elephants have veins very close to the skin at the back of their ears which they flap in order to cool themselves. For their head size, one would imagine a very large brain but it is actually very small, about walnut size. Elephants teeth are replace six times during their lifetime and after the last set of teeth have worn down, they struggle to eat. The approximate age of the elephant can be seen by their dung, the finer chewed leaves mean a younger elephant. There are huge herds of impala, wildebeest and zebra around. Even in enclosed areas such as this park, they still tend to migrate in order to find food. Wildebeest look like cattle but are classified as antelope. A pedal gland situated on the front feet is used in marking their territory, the substance secreted from this smells like tar. The youngsters are very light brown when born, and on seeing one feeding from his mother, I once had someone with me exclaim “Look there is an impala feeding off a wildebeest”. Okay, we are not all rocket scientists! Ah! The stories I could tell! I smile in memory of some of them. I think one of the best was about the professor from Florida who came on a tour with me. Before coming here, he asked his two children what they wanted him to bring back for them from Africa. The six year old thought a bit and said “Daddy, please bring me a hippo to swim in the pool” The four year piped up and said “Daddy, please bring me a giraffe to pick the coconuts off the tree” and I can always imagine our customs officers faces when he turns up at the airport with these two animals in tow and tried to explain his gifts. 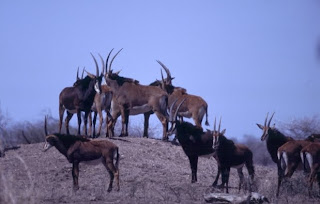 The heat seems to be coming off the road in a haze. I think of cool showers and swimming pools. And ice cream! There is a huge area where no animals are to be seen and I gather from this that it is not sweet grass growing there. The sky is almost white in color and nothing much stirs. But it will cool down soon and I look forward to reaching camp. I eventually see a herd of Sable antelope. What a magnificent find! They are not often seen and are definitely our most graceful buck. They stand almost as tall as a horse and have razor sharp back-curving horns. The males are almost totally black with white bellies, the females and young a chestnut brown. What luck! They are standing on a small raised piece of ground and I get some terrific pictures of them. This is definitely a bonus as I get to see them only once in about twenty trips. I stay there for about a half an hour taking more pictures but eventually I need to move on.
Part eight coming soon………
Posted by SAPhotographs (Joan) at 12:02 AM